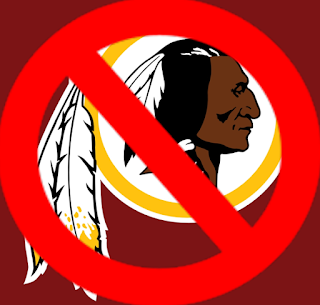 A trademark is a sign that can consist of words, designs, letters, numerals, colours, sounds or shapes that are capable of distinguishing the goods or services of one enterprise from those of other enterprises. The essential function of a trademark is to protect the intellectual property of an owner.

Recently, the Washington Redskins finally decided to drop the word ‘Redskins’ from their name after years of ongoing legal battles, changing public attitude and pressure from involved parties.

The ability to register ‘Redskins’ as a trademark was challenged as early as 1992. The U.S. Patent and Trademark Office’s (USPTO) position on the trademark has long been clear. Since 1992 they have rejected any new trademark applications involving the word ‘Redskins’. In 1999, they cancelled the federal registration of the trademark because it may disparage Native Americans (Harjo v Pro-Football, Inc). However, this was later appealed, and the decision was reversed because of insufficient evidence.

In 2014, the trademark was cancelled again on grounds of it being disparaging to Native Americans (Blackhorse v Pro-Football, Inc). The NFL team appealed to the U.S. Court of Appeal, and the case was put on hold because the outcome was reliant on the outcome of another similar trademark case at the time (Matal v Tam). The final decision, in that case, was that the Asian-American rock band were allowed to register the trademark ‘The Slants’, despite the derogatory connotations, because of the fundamental first amendment right to freedom of speech. After this decision, the case against the ‘Redskins’ trademark was dropped.

Now, the temporarily-named Washington Football team have a new trademark issue on their hands – finding and registering a new name. Over the past decade, numerous opportunists (arguably, with more foresight than the NFL team) have been applying for trademarks that could become the new name. Recently, some employees at Deloitte filed for the Washington Redtails. This means if the NFL team wants this name, they must either challenge the application or pay them off.

The issue is easier to resolve for trademarks still in the process of registration but more difficult for trademarks that have been successfully registered and can demonstrate they are in use. Mr McCaulay, an individual from Virginia, has registered several names including Washington Americans and Red-Tail Hawks (apparently also known as the Redtails) and has pending applications including Red Wolves, Monuments, Veterans and Warriors.

He has a website for a new flag-football league, coincidentally starting next year, that he will argue shows use of the names (www.washingtonamericansfootball.com). There are even links to the selling of mugs and glasses for the Washington Redtails (obviously the frontrunner in name predictions). Evidentially, there are going to be legal disputes on the horizon over the new name the Washington Football team picks.

In 2018, David Beckham’s new Major League Soccer (MLS) franchise based in Miami chose the name “Club Internacional de Fùtbol Miami” or Inter Miami. In response to the MLS’s attempts to register trademarks, the USPTO has raised grounds for rejection (but not confirmed yet) because ‘Inter’ is descriptive and a general term used for teams with international players or playing in international competitions.

However, back in 2014, Inter Milan sought to register the trademark ‘Inter’ in the U.S. Interestingly, in 2018, the trademark was conditionally accepted by the USPTO. It has not been officially registered yet, but if it is, then Inter Milan would potentially be able to prevent anyone using ‘Inter’ in connection with similar products or services in the U.S., which would apply to Inter Miami. The argument being that Inter Miami’s use of ‘Inter’ would give rise to the “likelihood of confusion” amongst consumers. 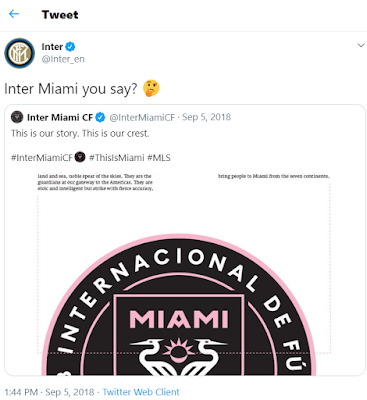 Inter Milan has written to the MLS to cease and desist their attempts to register ‘Inter’ and to change Inter Miami’s name, while the MLS has tried to prevent Inter Milan registering their trademark by filing an opposition to the application.

This opposition is based on two arguments, the first being ‘Inter’ is descriptive/general and the second being Inter Milan’s use of ‘Inter’ also gives rise to the “likelihood of confusion” between other organisations using the term.

In January this year, the latter argument was rejected by the USPTO on grounds that the MLS itself has no existing rights to the word ‘Inter’ to make this argument. A decision on the former argument is not expected until next year.

If the trademark ‘Inter’ is successfully registered by Inter Milan, then they could start infringement proceedings to prevent Inter Miami from using the name. Providing that the ‘Inter’ trademark is effectively used in the U.S. (note that Inter Milan scheduled their first pre-season tour of the U.S. since 2016, for this summer…) and it is evidentially being infringed by Inter Miami, then Inter Miami may have to change their name or create an official partnership with Inter Milan (as Real Salt Lake has with Real Madrid).

Manchester Utd has sued the makers of the video game ‘Football Manager’ (FM) for using the club’s name without a licence and also, interestingly, for NOT using the official club crest.

As for not using the crest trademark, the club is claiming this also breaches EU Trademark Regulations because in this circumstance consumers would expect to see a trademark and that replacing it with another image damages the economic function of their registered trademark.

SEGA and SI maintain that they are using the words ‘Manchester United’ as a legitimate descriptive reference to the club and they have done for almost 30 years with no opposition. They argue that attempting to prevent them using it would be a restriction of their right to freedom of expression under the European Convention on Human Rights. SEGA and SI also point out that Manchester Utd uses the game for research and scouting purposes and previous players and officials of the club have endorsed the game.

Recently, Manchester United attempted to amend their claim to add that Sega and SI were “acting in common design” with third parties that provide additional downloadable files containing such replica trademark images. The club claims this modification software means their trademark is being “affixed” to the game under the European Trademark Regulations.

This amendment was rejected, it did not reach the standard of having a reasonable prospect of success because the ordinary gamer’s use of modification software was deemed by the court to not be “in the course of trade”. Manchester Utd may try to plead this new claim again and raise the argument that nowadays many gamers are finding ways to monetize their gaming experience, thereby potentially satisfying the course of trade requirement.

Even without a new amendment, the original claims against SEGA and SI may go to trial (if no agreement is reached before). The decision could have huge implications on licencing agreements within the gaming and esports industries and for brand protection within the sporting industry.

In the future, we are likely to see more trademark disputes appearing in the sporting industry, and in the esports industry, due to the increasing commercialisation of sport. These are just a few of the more prominent ongoing disputes that highlight various issues surrounding changing brand identity, protecting brand identity, and ensuring that brand identity is capitalised on.

What is Financial Fair Play? The desired aim of Financial Fair Play (FFP) is to prevent clubs from spending more money than they earn to protect them from getting into financial difficulties and to ensure the sustainability of European club football. For those clubs that qualify for European club competitions, FFP is governed by EUFA. However, individual football authorities also have their own FFP rules, so the Premier League has its own rules, as does the Championship and so on. The general premise is to put a limit on the maximum losses a club can make over a certain period: UEFA say losses can be a total £30 million over 3 years The PL say losses can be a total of £105 million over 3 years The Championship say losses can be a total of £39 million over 3 years As a result of FFP, UEFA reported that combined club operating profits had risen to €600 million in 2017, compared with combined losses of €1.7 billion in 2011 before FFP was introduced. Similarly, before F
Read more